Sherbrooke Record8 Nov 2018 By Claudia Villemaire Jack Hobbs doesn't talk about medals awarded or speak of the courage it must have required as he piloted the Ansell (correction: Halifax) bomber from Middleton, England to targets in Germany and Norway. His story is about the friends he lost daily as one hundred bombers took off - in the dark - with only radio signals and a navigator – and flew for hours to the designated target, before heading back to base. "The average daily loss was ten per cent," he remembered, "and we were one hundred planes each time we were sent on a bombing mission. So, you can imagine many of the friends you made often didn't return." 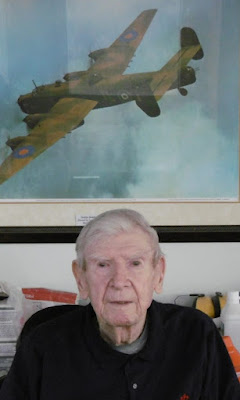 Jack Hobbs grew up in Asbestos and joined his father at the CJM Asbestos plant when he was sixteen and fresh out of high school. "We had the 7-11 Hussars Squad then, but joining up didn't begin to tempt me and my friends for a couple of years. But by 1940, the idea took hold and off we went to Sherbrooke to enlist. We sure didn't have any idea what we were getting into then," he says ruefully. With the determination to learn to fly, Hobbs made the transfer from the Hussars to the RCAF and his adventure began almost immediately. "We had to pass basic training in Sherbrooke, at the old fairgrounds where the camp was situated. From there, we went to Moncton, then, as we completed various stages of pilot training, to different camps across Canada." He remembers his first flying instructor, who showed him the versatility of the single-engine training plane. "He 'looped the loop’, flipped sideways, and did all kinds of scary things and I suppose it was a test of courage and determination for us young fellas who at the start had no idea what would be expected of us." Once in England, the Canadian pilots, navigators, and wireless operators were welcomed into the RAF where bomber plane crews were in short supply. This was 1941 and development and production of efficient war planes had barely started. The Ansell (Halifax) was a large, bulky, four-engine machine; capable of long flights, but not known for speed and agility. Missions could sometimes take up to ten hours, flown in darkness, definitely not in any particular formation. "They were long, tiresome flights with anti-aircraft flak coming at us as we approached our target." Hobbs doesn't talk about seeing other planes being shot down beside him. But he hesitates to remember all the friends he lost every time they went out. These days, this almost-ninety-nine-year-old veteran fills his time with keeping in touch with family members. Nephews, nieces and lots of cousins keep him occupied with phone calls and visits. These days Hobbs practices the piano, his instrument of choice since childhood when 'Mother', who was a musician herself, insisted on piano lessons. "But, I had a friend who played popular music and by watching and listening and with a little instruction I was soon playing the favorite songs of the day." Hobbs formed a small band and is still remembered for his music at local dance halls around Danville and Asbestos. "I play every Saturday morning here in the solarium,” he explained, and soon "Has Anybody Seen My Gal", a popular hit in the forties, was ringing out, catching the attention of a few residents as they gathered at the elevator to go down for supper. "I have to admit music has been my good medicine. After 18 missions, I couldn't take the stress anymore and had a breakdown. At the time, the average bomber crews suffering from mental stress and fatigue was after 13 missions and they were almost always done as bomber pilots. I guess I outlasted many of them but getting back on my feet wasn't easy. Music played a major role in my recovery." These days Hobbs, now a bit hard of hearing and with eyesight failing a bit, is getting ready to celebrate his ninety-ninth birthday November 24th at the Home. "Oh yes, they're all coming and we'll have a great party up on fourth floor,” he said, surrounded by photos and souvenirs, “It's not the first time the family gets together here for my birthday which is actually November 26th.” Time was slipping away as Hobbs stories unfolded and he remembered the tough times and the good times. Our conversation was coming to a musical end as he played the songs even I remembered as a child. Memories of Armistice celebrations in Sherbrooke flooded back to me as well, recalling my Dad, in uniform, mingling with Army, RCAF and Navy veterans and, of course, Jack Hobbs and I found friends we had both known as memories flooded back. Talking to a veteran whose participation in WWII, his account of bombing missions over Germany and Norway, brought to life the importance of remembering these veterans and underlined the privilege of meeting and talking to one of the last survivors of that part of our history.
Posted by Contact at 11:51 AM No comments: 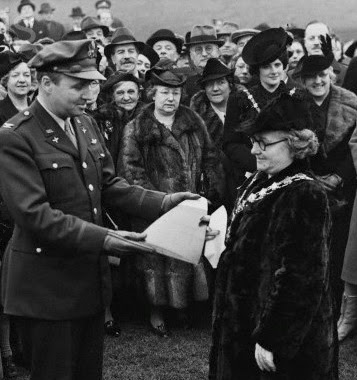 (Corbis) Memorial Service for Heroic Pilot, 1943 The residents of Edward Road in Walthamstow gather at a memorial service held in memory of Second Lieutenant Harvey Johnson of the United States Army Air Corps. Harvey Johnson died when his Spitfire crashed into a nearby playing field. He chose to stay with the plane and guide clear of the houses in Edward Road rather than to bale out and save his own life. At the service in his memory, US Colonel Towle hands a piece of the Spitfire's propeller to Mrs E.M. Miller, the mayor of Walthamstow, as a memorial to the dead pilot, 1943. Blackhorse Action Group Article - THE PILOT WHO SAVED EDWARD ROAD - On Sunday the 22nd of November 1942 Second Lieutenant Harvey Dalton Johnson of the United States Army Air Corps was on a supply flight over London when his Spitfire suffered mechanical problems (reportedly an engine fire). As the plane lost altitude Johnson was faced with the decision to either bail out and save himself or try to steer the plane to safety and avoid crashing into the residential streets below. The 23 year old opted to stay with his plane and attempted to land behind Edward Road on The Elms (now known as the Douglas Eyre playing fields). Although he managed to get it down in one piece, it made a hard landing and exploded in flames. Nearby residents are reported to have rushed to his rescue. It’s not known if Johnson died at the scene or of his injuries later. He had been planning to marry his fiancee Isabel Kahn over the Christmas period. The following year residents of Edward Road paid tribute at a memorial service. US Colonel Towle presented a piece of the Spitfire’s propeller to Mrs E.M. Miller, the Mayor of Walthamstow, as a memorial to the dead pilot. The memorial takes the form of a plaque that reads “To the grateful memory of 2nd Lieut. H.D. Johnson U.S. Army Air Corps who gallantly sacrificed his life to save the residents of Edward Road Walthamstow November 22nd 1942.” The plaque is mounted on a small section of the propeller of the Spitfire that Lieut. Johnson was flying when he crashed. Lieutenant Johnson was mentioned in the House of Commons the day after the crash, where his bravery and sacrifice in ensuring his machine did not fall on houses was given a standing salute by a member of the House. “The pilot chose to stay in his aircraft rather than abandon it by parachute and leave it to crash in a populated area with danger to the lives of the inhabitants and I am sure that the House will wish to join with me in paying tribute to his gallantry” Sir Archibald Sinclair The propeller memorial was on constant display at the Warner Estate’s office on the corner of Hawarden and Edward Road. Residents would pass it as they went in to pay their rent or service charges. After the sale of the entire stock of Warner Estates in 2001 the offices were closed and in April 2013 the building was demolished to make way for a new Willowfield school. The memorial has since been in the care of the Vestry House Museum, although many have suggested it should be incorporated into the plans for the redeveloped school.
Posted by Contact at 6:31 PM 8 comments: 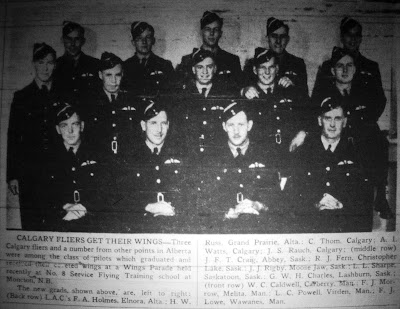 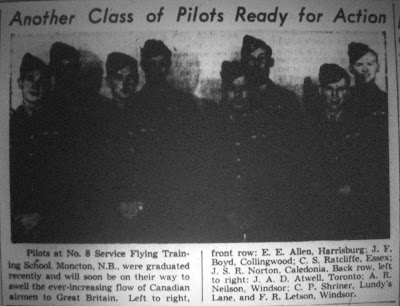 I welcome photos and information about No. 8 Service Flying Training School, Moncton

Copyright - Every reasonable effort has been made to locate copyright owners. If you identify yourself as the copyright owner of material on this website and object to its continued availability online, please contact the above address. 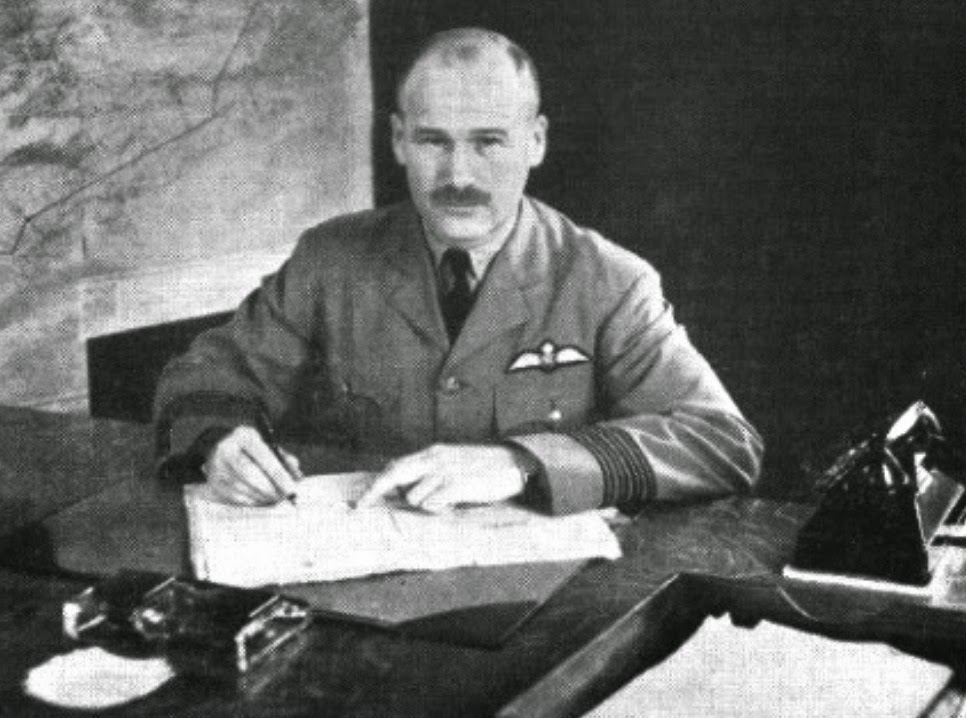 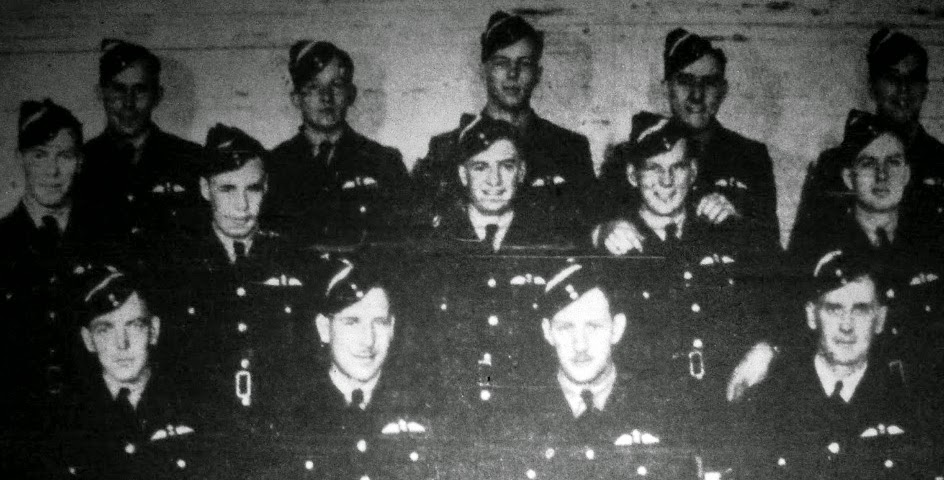 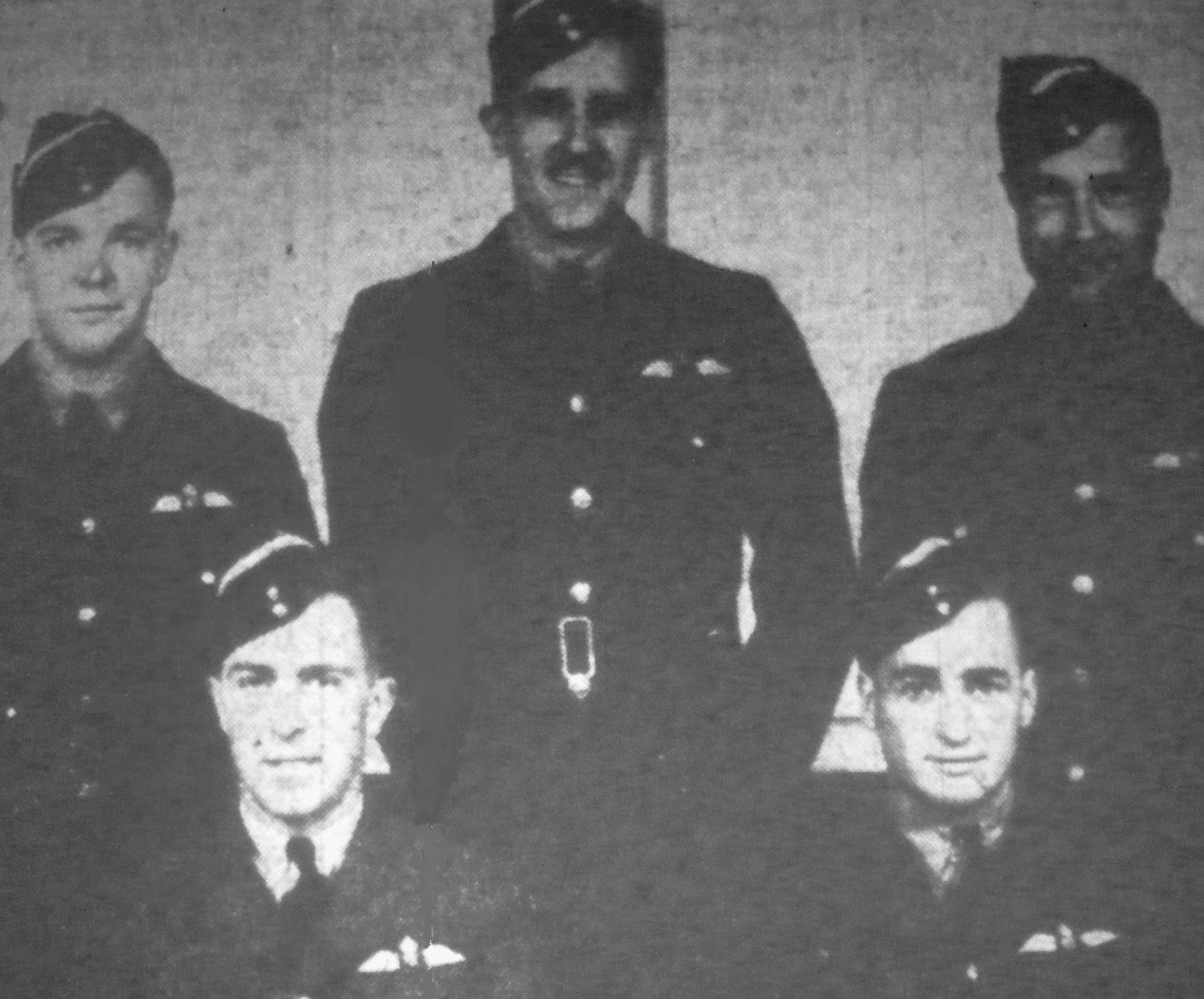 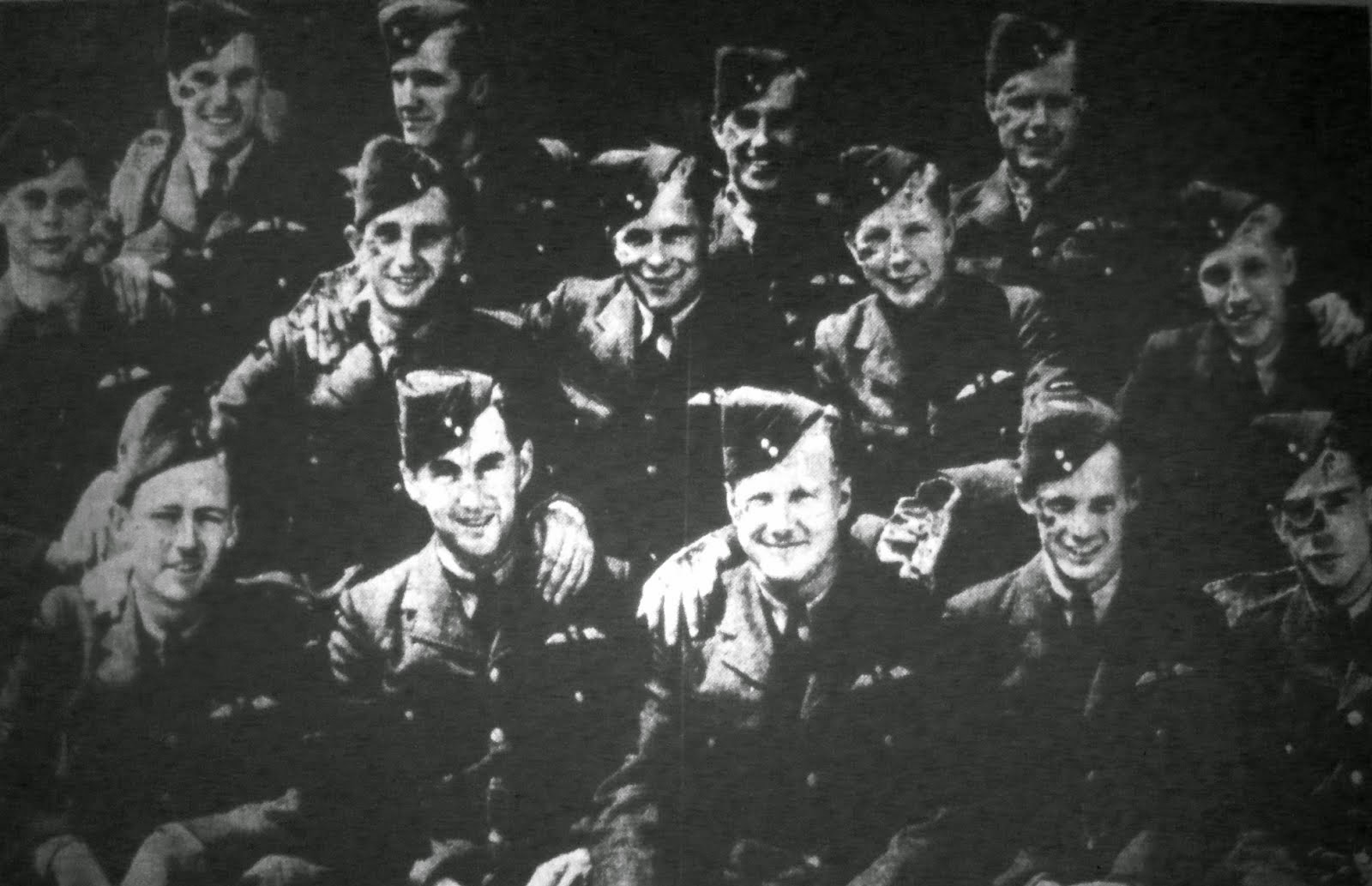 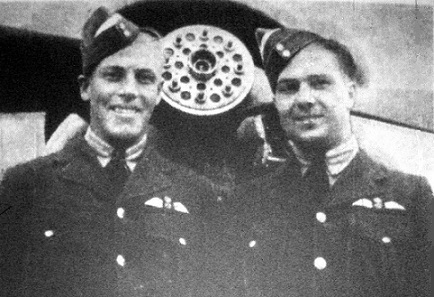 Wing Commander Brown presented wings to 34 of the original 50 trainees.

Wings Parade at 0900 hours in the Drill Hall.

Wings Parade held in the Drill Hall. The C.O. addressed the 57 graduates - 17 Americans. 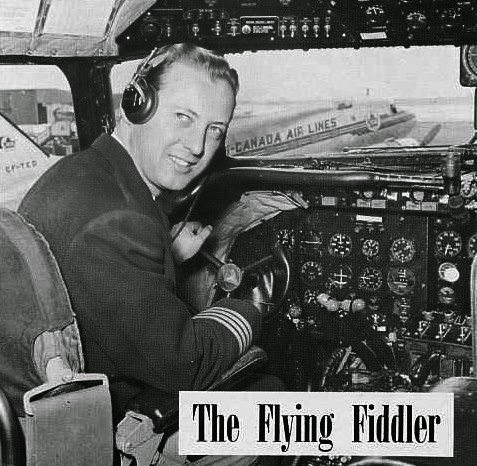 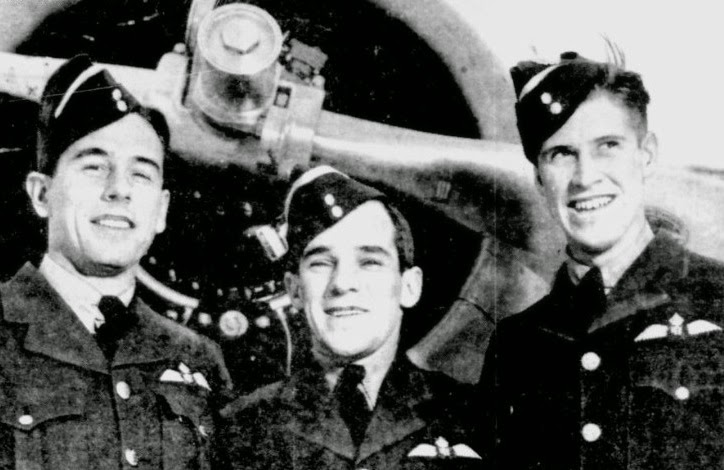 Wings Parade held at 0810 hours. Air Commodore J.L.E.A. Albert deNiverville presented wings to 52 graduates. This was the second course trained in Harvards instead of Ansons.

Graduates from Brazil and Newfoundland 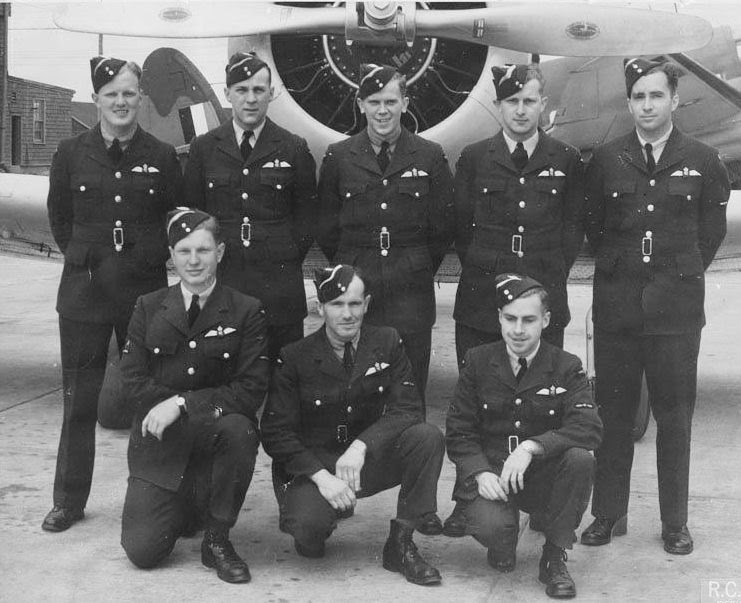 Following the parade, another interesting event took place in the Recreation Hall, the first wedding to be held on the Station. A.W. 1 Van Brugh became the bride of Sergeant Pilot William H. Vallee, one of the graduates of Class 50. The Bride was given in marriage by Group Captain Brown.

Group Captain Brown presented wings to the 52 graduates and afterwards led the remainder of the parade with three rousing cheers for the new pilots. The graduating class led the March Past and Group Captain Brown took the salute. The parade was held on the tarmac between No. 3 and 4 Hangars. 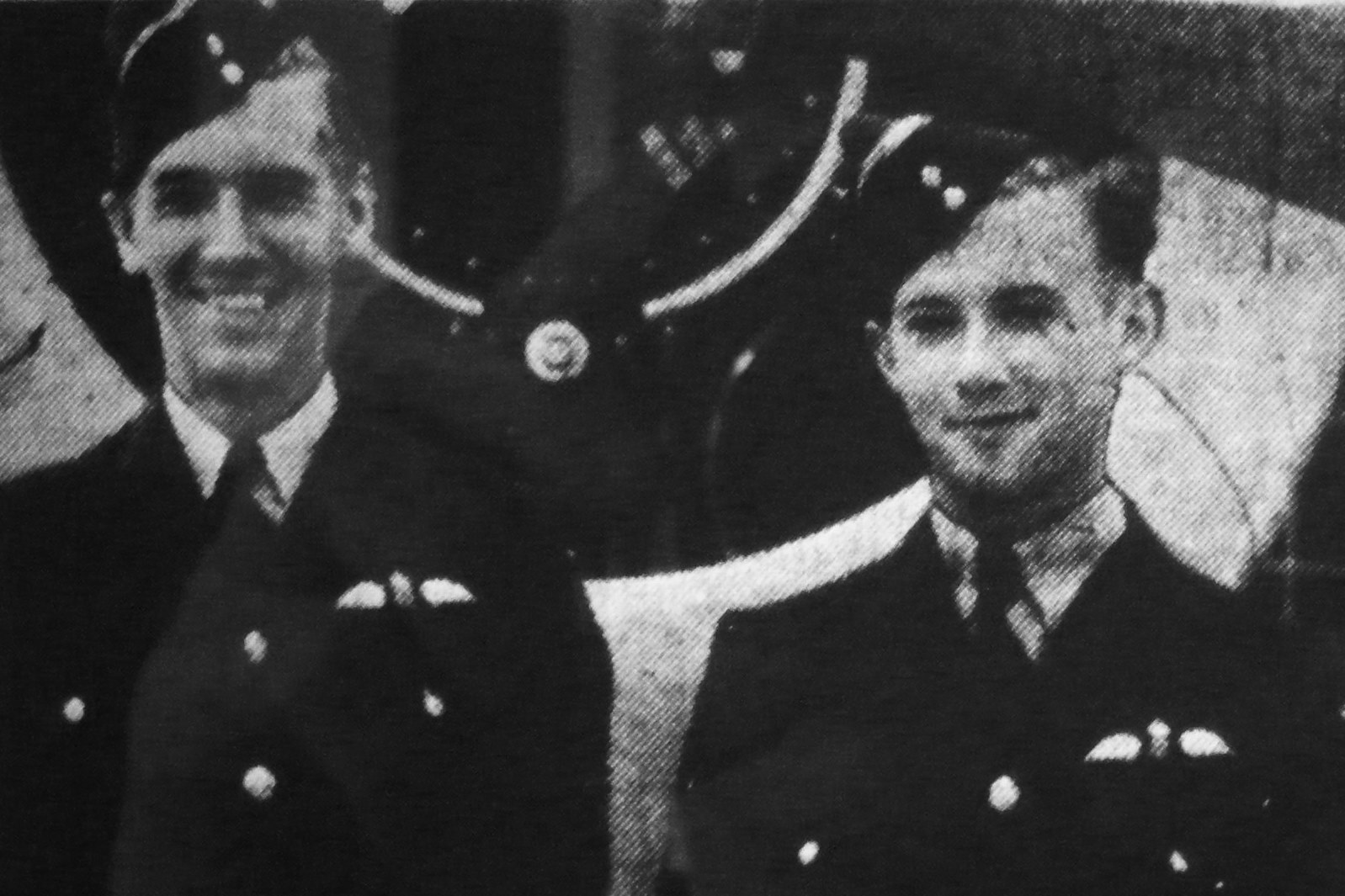 Wings Parade held at 0900 hours out on the tarmac. Group Captain W.W. Brown presented wings to 48 graduates. LAC E.R. Crocker had his wings pinned on by his sister A.S.O. E.R. Crocker.

July 14, 1942: (R/130041) LAC George Ewart Pitcher, of Sault Ste. Marie, was killed in a night flying accident near the village of Malakoff. This marks the first fatal accident from night flying.

August 12, 1942: A farewell dinner and smoker was held in the "Florentine Room" of the Brunswick Hotel by the staff and class of Course 54 "Dawn" Flight on Wednesday evening.

The two senior classmen in the flight sat on either side of "Dawn" Flight Commander, Flight Lieutenant Arthur Coles at the headtable. Instructors P/O Heartz, Orpen, Murray, Hickey, WO1 Campbell, WO2 MacDonald and Jones. 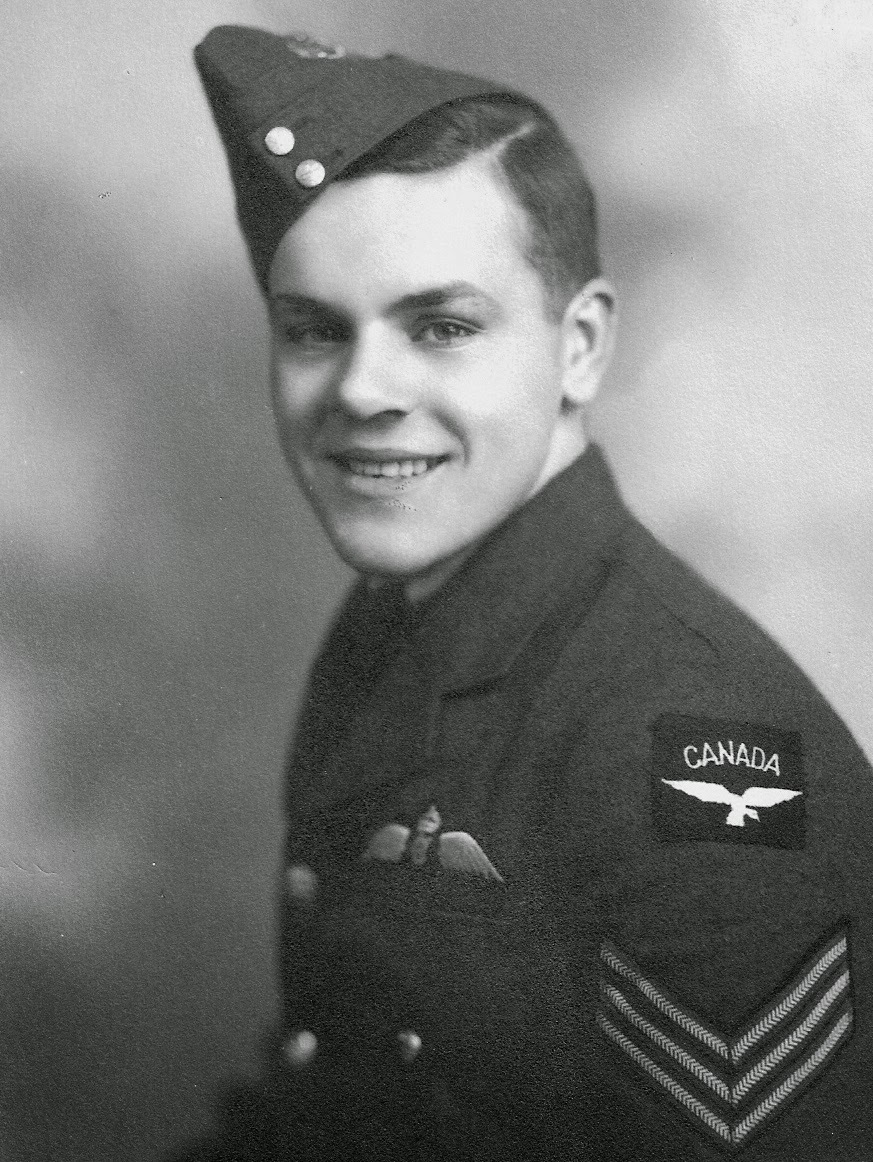 John F. Haldimand, of Montreal, received his sergeant stripes and wings from his father, Lieut. Haldimand, a flier with the Royal Flying Corps in the last war. 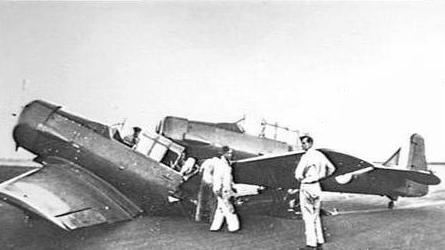 May 1942: Harvard accident in which RAAF Leading Aircraftman Philip Lovett collided with the stationary aircraft on the left. (Lovett/AWM) 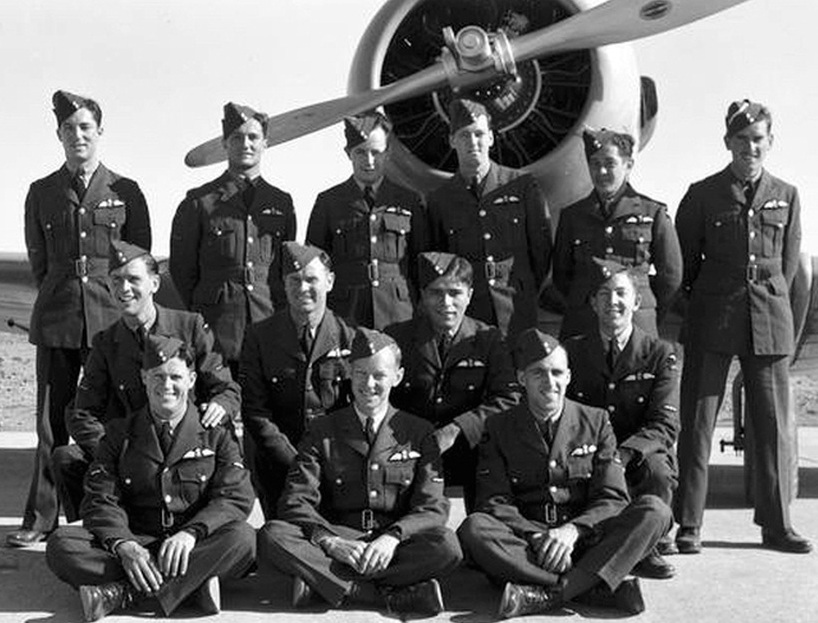 This was the last class to graduate from the school to train on Harvards.

Posted in from
No. 11 EFTS: Poirier

November 9, 1942: Course 68 reported to No. 3 Hangar for flying duty. Due to shortage of Ansons they had to start their training in Harvards doing instrument flying. 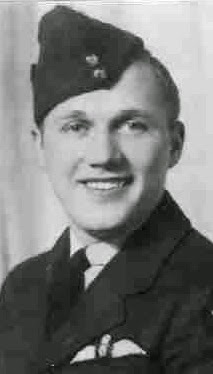 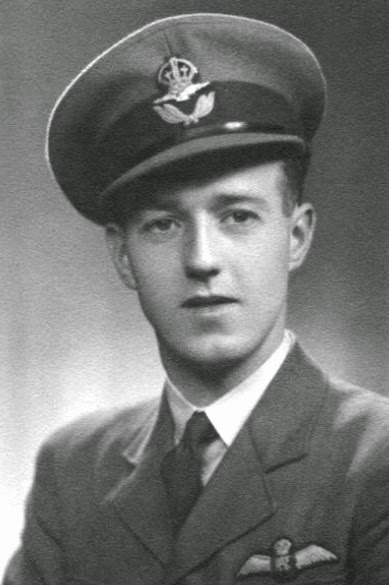 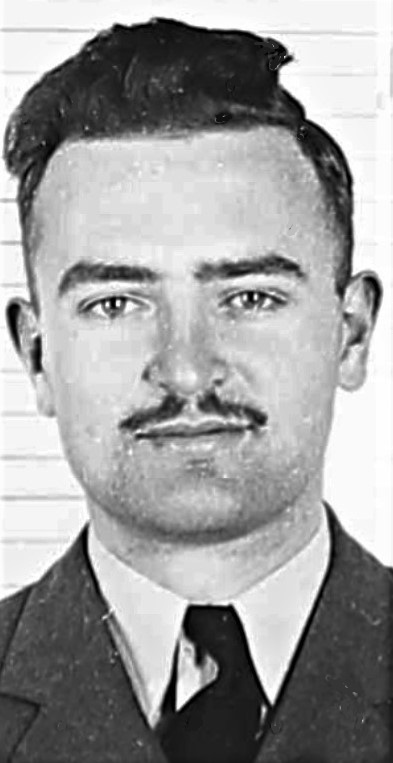 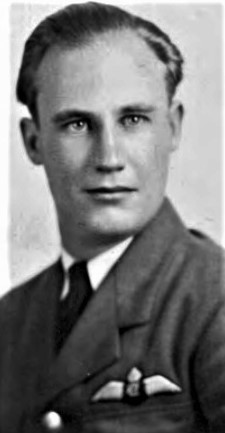 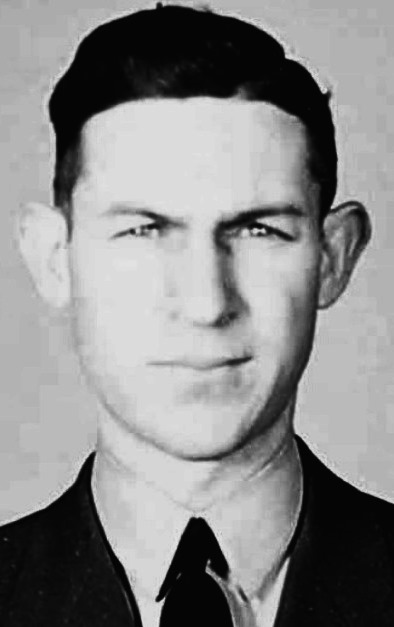 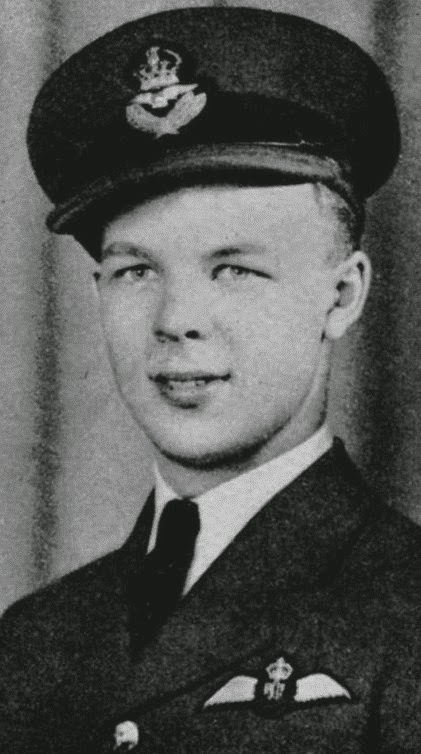 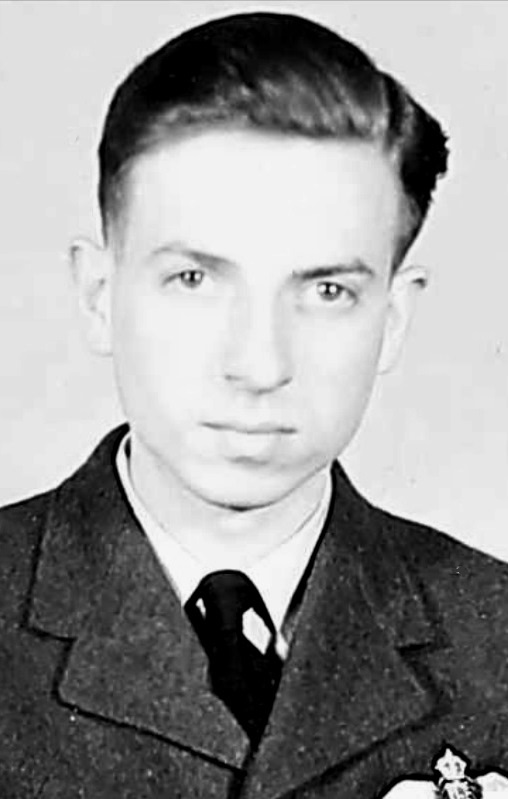 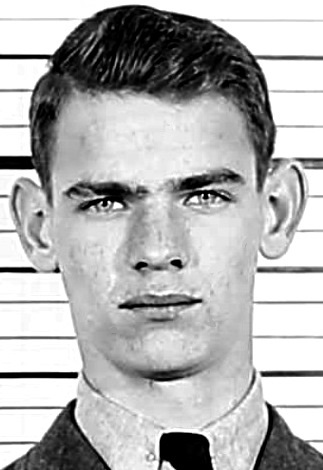 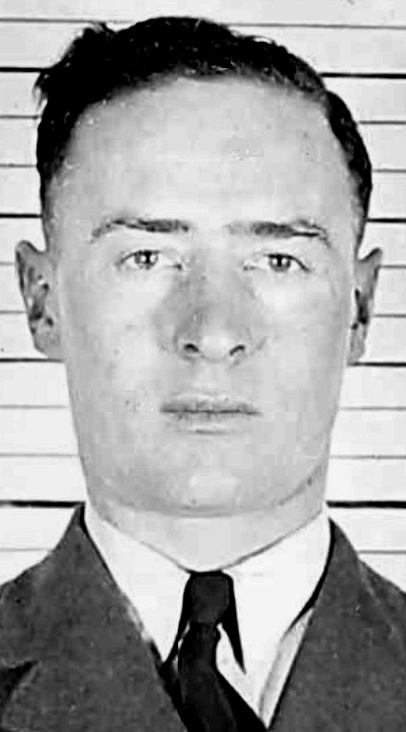 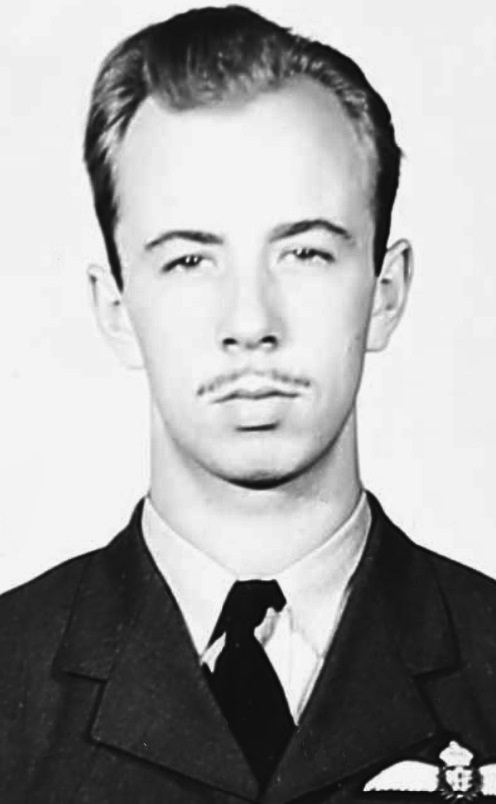 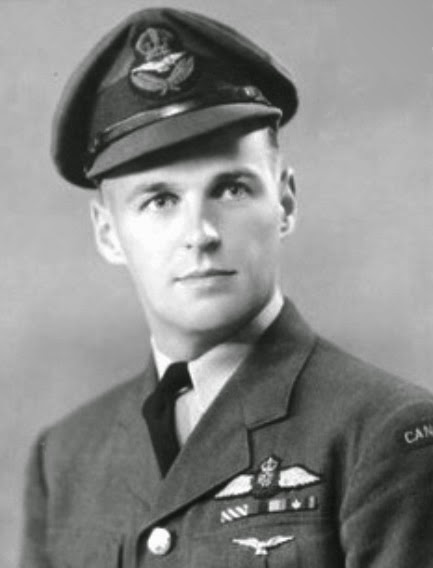 No. 614 Squadron Distinguished Flying Cross citiation: Flight Lieutenant Irwin has completed numerous operational sorties, most of them against well defended targets in the Balkans, Hungary, Italy and southern Germany.During several attacks his aircraft has been damaged. On all occasions he has proved to be a resourceful and skilful pilot who has set a fine example to others. 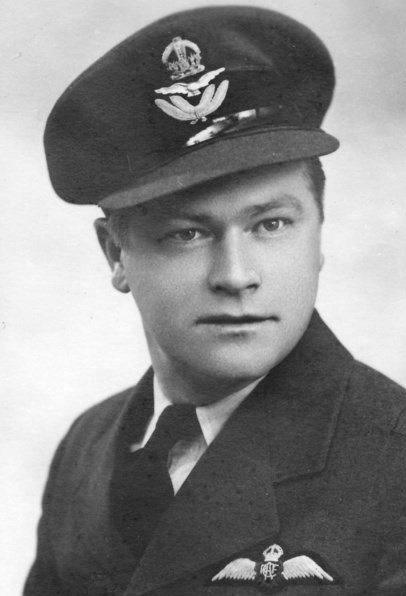 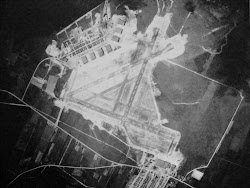